A few weeks ago I found myself up a mountain in Catalonia.

Now, I’m pure City Folk at heart, but there are times when even I ditch the hustle & bustle to seek out fresh air and nature.

So during a workcation (yes, I’m one of those people now) in Barcelona, I took a day trip to a small town called Tavertet, nestled in the mountains around 900m above sea level.

That’s probably not even a mountain to most people, but to city-slicker tourists like me, it’ll more than do the job.

As you’d imagine of the Pyrenees – actually it turned out to be in the Pre-Pyrenees, which kinda took the edge off, but look, whose story IS this? – the air was crisp and the views spectacular.

Here I am, ‘enigmatically surveying the valley below’ at sunset: 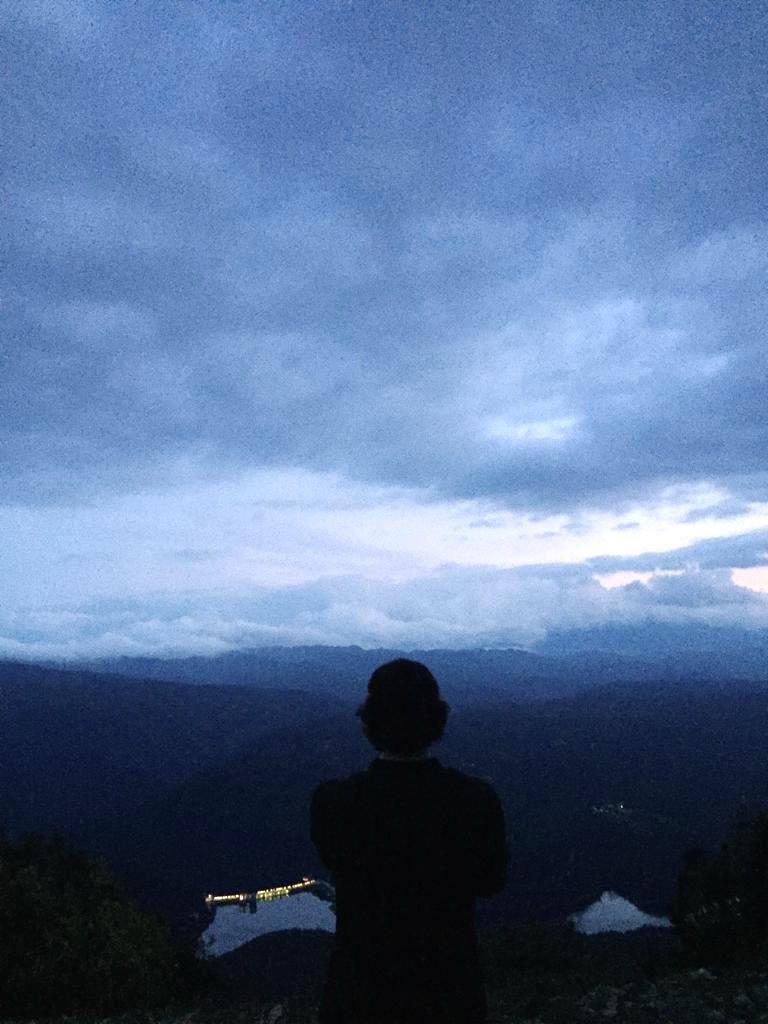 While I was up there, I remembered my favourite mountain story from my childhood.

When my Dad was about the age I am now, he would go on climbing and hiking weekends with his buddies.

On one trip, he led an expedition up Mount Somewhere in the north of England (that’s right, I’ve forgotten the name so we’re going with Mt. Somewhere).

After hours of dragging themselves and their supplies uphill, through wind and rain (and probably orcs and trolls too), Dad’s crew finally reach the summit.

They pause, exhausted, to take in the scene around them, and take deep gulps of the clear mountain air…

…and watch with amusement turning to mild concern, as my Dad starts shouting, and then running.

He runs, arms outstretched and a manic look on his face, towards a solo climber he’s spotted a few yards away, clearing away a picnic.

My Dad embraces this guy like the world is ending.

Had he gone mad?

Had the thin mountain air gone to Dad’s head and turned him into some raving stranger-hugger, hell-bent on cuddling every random climber they would encounter for the rest of the trip?

Turns out, Dad had chosen to climb the same one of the UK’s 120 mountains on exactly the same afternoon as his younger brother, my Uncle Ken.

Now, England isn’t the biggest of countries, but this was still a pretty mad coincidence…

Given that neither brother lived within a hundred miles of the peak, or each other, and weren’t exactly in the habit of chit-chatting about weekend plans either (because northern men).

Something had drawn them up there on the same day, at the same time.

Two boys born decades earlier in the same house hundreds of miles away, on top of a mountain, laughing and crying with the surprise of suddenly finding themselves together in the same remote spot.

Back home, my Mum and I heard about this unexpected reunion that evening via a phone call from the pair – in, let’s face it, ‘an advanced state of refreshment’ – from the nearest pub they could find with a payphone.

It sounded like they were having the time of their lives.

I think this story always stood out in my mind because as a kid, it taught me that an often grey, humdrum world was actually full of weird possibilities and happy coincidences…

There were small mysteries waiting to be solved, brothers to be found on mountaintops, and friends to be made in far-flung places.

Some names and details would fade and be forgotten, sure…

But the feelings of surprise, fear, joy, love – they would remain in the memories that define who we are.

I thought about that often-told family story just a few days ago, on the first anniversary of my Dad’s passing.

Because it feels like it’s been an important part of who I am for a long, long time – even though I wasn’t there to see it happen.

That’s the power some stories have, and the influence that a shared memory can sometimes spread to people beyond its protagonists.

As I stood on my mountain in Catalonia and watched the sunset, I was excited by the thought of who I might run into around the next bend, and what stories we would tell.

Thanks for letting me share this one with you.