There’s a language we’re all fluent in without realising it:

German artist and illustrator Christoph Niemann made this point in his recent TED talk, combining his trademark humorous images with a seasoned stand-up’s comic timing.

(Plus he’s funny as hell.

Niemann’s distinctive work has appeared on covers of The New Yorker and WIRED, and he counts Google and MOMA as clients.

His USP is combining objects and concepts to communicate ideas in new ways.

His work is witty, original and – here’s the genius part – always makes you say “why didn’t I think of that?”

That’s the hallmark of a master communicator:

He takes complex concepts and makes them simpler to understand.

This approach is essential for businesses who want to stand out from the competition by making their unique value more VISIBLE and more DESIRABLE.

(And that includes you, right?)

1 – “You need to have a good understanding of the visual and cultural vocabulary of your audience.”

Like all good artists – and all successful marketers – Niemann recognises the importance of EMPATHY.

There’s no point creating art, products or marketing that only makes sense from where its creator is standing – however beautiful it looks, or however wonderfully it reads (copywriters! Wake up at the back.)

Effective messaging builds a bridge between two people. One that needs to be able to be crossed from both sides.

Niemann uses this example of a pierced heart to show how he might illustrate the universal image of love:

Too realistic or literal = people get grossed out (who really wants to be shot through the heart anyway? Unless you’re Jon Bon Jovi)…

Too abstract = you won’t be understood by your target audience (you’ll score points for originality, but without clarity you won’t sell a bean).

In marketing, that means don’t get over-specific, burying your readers in details and stats that don’t concern them.

BUT be sure to balance that using references that connect with and engage them like an arm around the shoulder. Cultural references, familiar problems, shared beliefs…

In short: know your audience.

Which phrases do your customers use to describe their situation?

What niche-specific jargon can you employ to show you’re on their wavelength, without turning them off?

Get this balance wrong, and you risk losing your audience whenever you try ‘selling’.

(Here’s a smart way to uncover the messaging that fixes that problem for your market.)

2 – “The deeper something is etched into your consciousness, the fewer details you need to have an emotional reaction.”

Niemann outlines how it’s possible for someone to really ‘get’ a message even without much detail, AND become emotionally engaged – provided they’re already familiar with the context and the subject.

To do this we use ‘shortcuts’ that communicate simply and directly. He used visual examples in his talk: 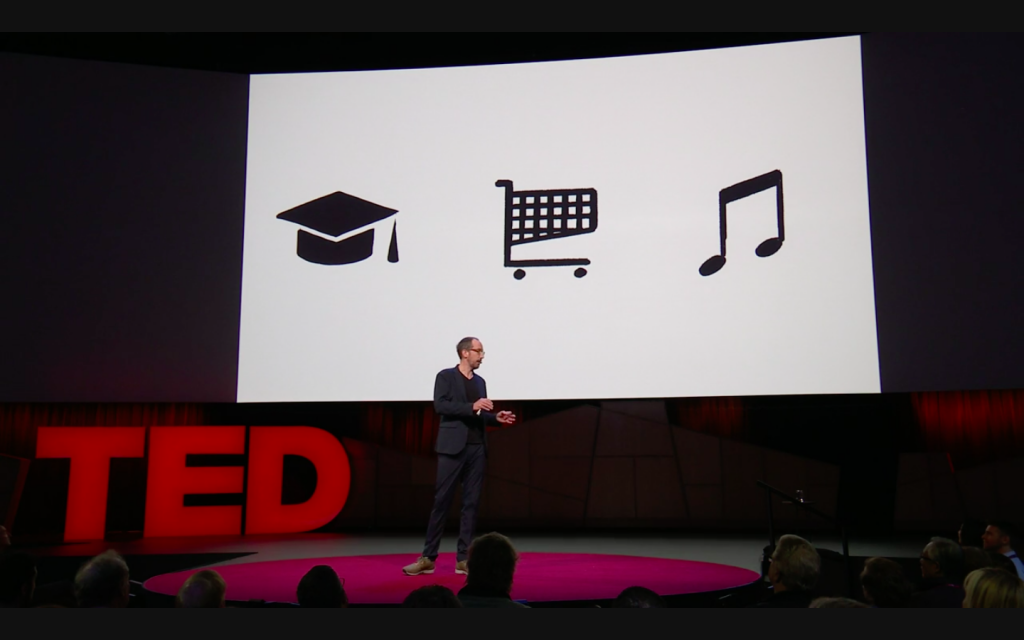 The cool part is, each of us has a unique set of ‘shortcuts’ hardwired into our psyche…

An illustration of say, Donald Trump might be recognised by a large majority, so it doesn’t need to be a spot-on visual recreation to trigger an instant emotional response.

…because those people ALREADY have deep consciousness of the subjects.

Yet elsewhere, those same illustrations may not mean anything

Visual shortcuts like the familiar icons above allow a message to be communicated faster and more powerfully.

You see one of those icons and you know what it means for you – an outcome, not just a representation.

Your mind uses a shortcut to fill in the blanks. And as Niemann says:

“The image really only exists in your mind… so how much info do we need, to trigger such an image?”

When you’re communicating with people who have deep knowledge of your topic, you can use visual AND written shortcuts…

On sales pages for folks with high awareness of the situation your product/service solves, you can (and should) tap into that awareness.

The best prospects for any offer – the enthusiasts, experts and pre-qualified leads – have a whole host of these ‘images’ stored in their brains, just waiting to be unlocked by your message…

When you use the right key – the right shortcut – to access them, you’re rewarded with attention and curiosity.

Again, it’s all about empathy:

Prompt your site visitor’s imagination to ‘fill in the blanks’, and you’ll get more engaged readers who picture themselves in the situation you’re describing…

They’ll make a personal connection with your message – WITHOUT needing every detail or emotion described for them (show, don’t tell)…

…then we use those insights to create messaging that makes YOUR product or service more visible and desirable to them.

Here’s how I’m doing that for a handful of growing businesses this year.

PS – got a favourite TED talk on communication or marketing? I’d love to watch it!

Drop a link in the comments and tell me why you love it.