There’s this scene in Mad Men that has a peculiar truth to it.

(I know. A copywriter who watches Mad Men? How predictable.

But whatever, I love Mad Men – and not because it’s about copywriters (it’s not).

It’s not even about advertising, not really.

That would be like saying The Sopranos is ‘about’ garbage disposal management. It’s not. That’s just what the characters say they do for a living.

Mad Men is about much more than just one thing*, which is why it’s such a great show.)

Anyway, there’s this scene where the ad agency observes a focus group for one of their clients.

The client’s product is a canned dog food, and the pet owners in the focus group have their dogs with them to sample the chow.

The moderator asks them questions about their four-legged friends, and something revealing starts to happen… 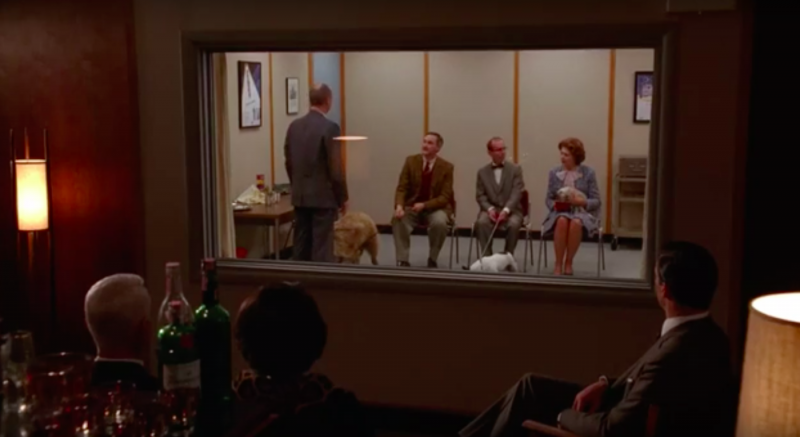 Moderator: “How would you describe your dog’s temperament?”

Man with big dog: “He’s independent, you know. He knows what he likes. He’s pretty hard to fool.”

On the other side of the mirrored glass, Sterling Cooper’s creative team sits watching the group.

One junior copywriter voices what we’re all thinking: “Oh my god, they’re describing themselves.”

To which Don Draper, who’s an old hand at this, replies: “This your first group?”

(I had a cat, and yep, I decided he was like me. Told you I was predictable.)

(But seriously HE REALLY WAS.)

We all see ourselves reflected in our purchases, our choices, even our pets.

So as a biz owner, when your prospect is deciding whether to buy from you, remember:

That they’re a ‘good’ person.

Or ‘independent, pretty hard to fool’.

I don’t just mean about a company’s sound environmental policies, or the fact they don’t put horse meat in their dog food (unlike the focus group client in Mad Men)…

…but also about the personality and beliefs on the other side of the deal table.

Besides all the facts and figures you can use to sell your stuff, your buyer ultimately needs to feel comfortable with their choice, and how it reflects their identity.

“People don’t buy products, they buy better versions of themselves.”

We all tell ourselves stories about who we are.

I’m not saying all this to be cynical – I do it too. Everyone does.

It’s what separates us from the animals (I guess there’s other stuff too, but for today, it’s this.)

No matter how irrational or inhibiting, this is how we make sense of the world we live in.

We make choices based on our own nutty philosophies and subconscious biases – and you’d better believe your customers have ‘em too.

So you can use your sales messaging to connect with them, or to argue with them.

(But did you ever try telling someone their way of seeing the world is wrong? It can get messy, fast.)

Maybe you’ve seen your ideal customer’s beliefs bubble up to the surface, revealed when you talk with, interview or survey your audience.

In which case, you’re ready to get up close & personal with your people…

To find common ground in their gripes and grouches, their deeply held beliefs and reality-be-damned behaviour.

Or maybe you’re in the dark about what those are for your market?

Either way, it’s worth digging deeper and really trying to tap into who your potential customers believe THEY are…

…and especially, who YOU are to them.

Because choosing your product or service is connected to their IDENTITY…

And when you know what kind of dog your best customer THINKS they have, it makes communicating with them much easier.

*actually, if pushed, I’d say Mad Men IS about one thing specifically.

One word, in fact.

It’s the last word in all-caps in the final subhead above^^.

If you’re a Sterling Cooper fan too, hit me a reply in the comments and tell me if you agree or disagree…