As you’ve probably realized by now, I’m a big fan of the power of questions.

Questions to better understand the people we serve…

Questions to help us create, develop and share our products.

So I thought I’d start sharing some of the questions that most excite, assist and intrigue me

Plus some of the Qs I’m seeing other people use to inspire, provoke, investigate and communicate.

One of the most fascinating books I’ve read in the past couple of years is ‘A More Beautiful Question: The Power of Inquiry to Spark Breakthrough Ideas’ by Warren Berger.

I’ve talked before about how it’s influenced my work, and now there’s a sequel on the way called ‘The Book of Beautiful Questions’, which I’m excited to read.

You can check out the trailer and extracts from the new book at Warren Berger’s site.)

So to start our occasional question-fest, here’s a fun personality-based Q that evolved out of a discussion with some friends recently (possibly in the pub):

“What would you say to the person you’ve never met before who’s had the biggest influence on your life?”

First, focus on your gut reaction for a moment:

WHO that person would be, and WHERE you might encounter them.

Everybody has fantasies of running into a hero (or villain!) and getting the chance to tell them how they’ve influenced their life.

It might tumble out in a passionate rant, or it might just be a heartfelt handshake and a quick thanks.

You’ve probably played this scenario out in your head more than once.

But most of the time our answers stay locked up in the ol’ brainbox, drafted and edited only in our most introspective or inspired moments.

Which is a shame, because I think each of our unique responses says a lot about us.

So, what would your answer be?

What would YOU say if you bumped into that person whose work or art has meant more to you than anyone else?

Your answer will reveal a lot about you, and the cool thing is: no two people’s answers will ever be the same.

It’s also a fun exercise, and one that helps us get closer to the version of ‘who we are’ that our audience and ideal customers respond to.

Grab a pen and paper, or open a new document on your computer, and give it a go.

Also, hit me up in the comments if you’d like to share your answer – I’d love to know what you’d say in this situation.

Again, the question is:

“What would you say to the person you’ve never met before who’s had the biggest influence on your life?” 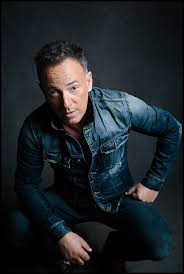 Hey, you’re shorter than I expected. Sorry, that’s rude – bit star-struck over here. Give me a minute…

Oh, you recognise me too? Ha! Wow, cool…

(Ok, I KNOW this wouldn’t happen – but whose fantasy is this anyway?!)

…yeah I’ve been front row a couple of times so maybe you noticed me there.

Albert Hall, second date on the 2005 solo tour, plus some E Street Band shows in London.

So listen man, I gotta tell you before you run off:

Your work has meant so much to me over the years. I guess you get that a lot.

But it’s been there for me through good times and bad. As much as any artist I can think of.

It’s inspired and supported me, and even helped with my work – like how you tell stories in your songs, and how they don’t always have happy endings, like real life.

There’s a deep truth in some of those – Racing In The Street, The River, Stolen Car, ALL OF Nebraska, I mean holy hell…

Incredible stuff. I guess it can’t have been easy putting some of those songs together, but it’s important work, so thanks for doing it.

Also how you’ve always stayed true to your values, even as you grew from an idealistic teenager into a grizzled family guy, and all the fun and games in between.

I’ll admit I didn’t love everything back there in the late ‘80s & early ‘90s – Human Touch wasn’t, er, perfect, and what the bells were you wearing on the cover of Tunnel of Love? – but man, some of your records are just THE BEST.

There’s so much a writer can learn from them, and my favourites change over the years, I guess yours too. Like you said, I believe you really can change someone’s life in 3 minutes with the right song.

And your book was fascinating – I liked how you were very honest about the times you’ve screwed up and the people you hurt when you were being a bit of a shit, which seems like the right thing to do.

I’ve never been anyone’s idea of a hard worker, and I’ll always advocate for quality over quantity, but I really admire your work ethic and how you inspire those around you to keep up and maintain standards, dependability…

That thing you said about a gig ticket being a contract between you and the buyer, that meant you had to deliver 100% on that one occasion, for that person, every time…

It’s the personal connection amongst all the big numbers that matters. That’s what I’m trying to help people do with my work.

And your loyalty to your friends and colleagues, even when you need to go off and do your own thing for a record or tour or whatever, that’s something that resonated too.

Plus I heard you gave $20k back in 1985 to striking Durham Miners when you played near my hometown, which was a pretty big deal. My Geordie Grandma would’ve loved that!

Anyway, I’ll let you go, you have shows to play and songs to write…

Just wanted to say thanks for the music, and the inspiration, and for playing Bobby Jean at both London shows in 2013. I hope I get to see you do it again at the next one.”